Samantha* was surprised. Her son was typically a very caring and empathetic child. So when he told her that he wanted to blow up his school, she wasn’t sure how to react. She asked what would happen to everyone in the school if it were to be blown up. He explained that the school would be empty and that only the building would be destroyed. Still, she was troubled.

In addition, he told her that he “didn’t like” a girl in his first-grade classroom who had developmental delays. She did what she felt was logical and explained to him that this little girl had a learning disability and, thus, special needs. The more she explained about the disability of the girl in his class, the angrier and more resentful her son became. She was disturbed by his reaction.

This is when Samantha called me. She explained that while her son was not incapable of mean thoughts and actions, in the past, those were usually due to some perceived wrong or hurt that had been done to him or to others. He had a strong sense of justice and was usually a fiercely loyal friend. Even when he was a baby, if another baby cried, he would cry too. Both she and her husband highly valued their son’s feeling of compassion. She admitted that she was beginning to see other behavior that concerned her as well. Was her son becoming mean?

Samantha described how her son had recently begun begging not to go to school, and when he did go, pleaded for her to help in the classroom and on the yard. Periodically, the principal or teachers would report his misbehavior at school – striking out at other children and running into off-limits areas. At first, she and her husband simply asked him to “behave.”

More recently, Samantha had been spending time at school and observed that, in fact, it was her son that was being bullied. She heard one story from a girl in her son’s class. Every boy in their class was invited to be in the “boys club” except her son. One boy pretended to invite him into the club, as long as he would meet at a certain area on the yard, intentionally planning it so that no one was there. Her son had waited at the spot all during recess until he realized he was being made fun of. At first, Samantha couldn’t believe it. She didn’t want to. Could his “misbehavior” be in retaliation of being bullied, left out, and misunderstood? She was confused and at wit’s end. She wondered with me if all of this could be related.

It is sometimes necessary to tolerate our own difficult feelings in order to model empathy for our children. It was painful for Samantha to bear the possibility of what her son had been enduring. She eventually came to understand that her son had felt unprotected by the adults at school. Even more difficult for her was realizing how she hadn’t been able to guard him against harm over the years.

As we talked at length and through the process, Samantha revealed that this little girl with disabilities in her son’s classroom had an adult assigned to her at all times by the school district. I pointed out that perhaps it wasn’t that he didn’t like her disabilities, or who she was., but that he needed the kind of support she was getting. Could her son be jealous or her? It was as though a light bulb went off for Samantha. This girl got special attention and protection from the adults – both things that her son was not getting. His behavior was beginning to make sense.

Later, Samantha talked with her son and asked if he was jealous of this girl. She later reported that he’d nodded yes. “Why does she get an adult to protect her, and I don’t?” He asked.

Samantha’s heart sank. But she continued. “It would be nice to have an adult understand what’s been happening for you at school, wouldn’t it? I wonder if you wish that you had an adult assigned to protect you. I wonder if you wish you had more people on your side.” To which her son, whose first response to strong emotion was more often anger lately, nodded and became tearful. They hugged. She gave him all the compassion she had in that hug.

Samantha worked with the school to address the bullying that was now clearly happening. She eventually had to change schools to find a better fit, but her son is now making friends and thriving. Samantha continues to strive to raise a good human being.

*name and some details have been changed

Teresa Currivan is a mother, licensed marriage and family therapist, author, and parent coach at  Help My Child Thrive Coaching LLC and The Right Place Learning Center. She is

the author of  My Differently Tuned-In Child: The Right Place for Strength-Based Solutions. She offers assessments and coaching to children who are tuned-in differently as well as support for their parents. She specializes in co-occurring symptoms such as dyslexia, ADHD, autism, high sensitivities, school and social issues, visual-spatial learning styles, sensory processing issues, anxieties, depression, giftedness, and twice-exceptionality. She has connections to San Francisco, Bay Area schools and speaks to teacher and parent groups there about differently tuned-in learners. She is published on sites such as Mother.ly, Filter Free Parents, GHF Forum, and Hoagies Gifted Education. You can follow her on Facebook at  fb.me/TeresaCurrivanCoaching. 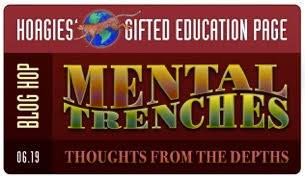 This is part of a blog hop over at Hoagies Gifted Education Page. Click this link to see what other bloggers have to say on the topic “from the mental trenches.” Hoagies Gifted Blog Hop: Mental Trenches: Thoughts From the Depths 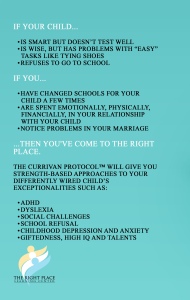 Monday through Friday by phone or video call.

Saturdays 9am to 3pm in person at:

Other hours available upon request